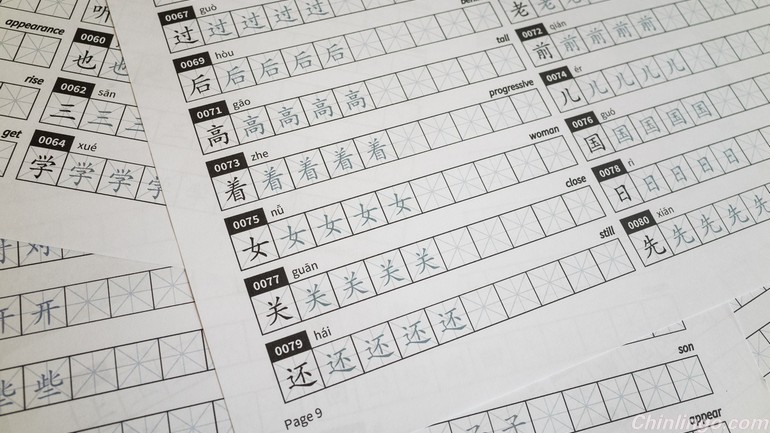 There are around eighty thousand Chinese characters. To the new Chinese learner, this can seem daunting. However, just like many words in English, the majority of these characters are not used in day-to-day vocabulary. If you can recognize even one thousand characters, you would be able to read and comprehend up to 80% of Chinese writing.

Not to worry, we’re here for you. We’ve compiled a quick list on the top 10 most common Chinese characters and how to use them.

Known as one of the three “de” particles of Chinese, “的” is used to indicate possession as well as attribute adjectives.

“一” means one. The reason why “一” is so common is because it can also mean the following: first, best, a little, once, only, etc. So many phrases require the 一 character, which bumps it to second place on this list. It is also a component of many ChengYu, or Chinese idioms.

I ate one apple.

I got first place.

You are my one and only.

“了” is loosely used to indicate tenses, specifically past-tense or ongoing incidents. It can also be used to intensify adjectives.

I’ve been in America for two years.

Your Chinese is too good!

“是“ is closest to the meaning of “to be,” in English. Because Chinese doesn’t have conjugations, there are no other forms of this basic word. It is mostly used to link two nouns together.

This is a book.

Her shoes are [the color] red.

“我” means “I,” so it is not surprising that this is a very common word. It also appears in phrases such as “us,” and “we.”

He is not American.

“在” is a preposition that can be confusing for many Chinese learners. It is mostly commonly used to indicate location, similar to how “at” is used in English. In Chinese, it also follows verbs to describe the place of an action. It can also be used on its own to describe an ongoing action.

I am at the airport.

Where do you live?

Another common Chinese character, “人” means “people,” “person,” or “man.” You may have noticed in #4 that “人” is often used to describe people from a specific country. Instead of “Chinese” as an adjective, we say “中国人” or “Chinese people.” It also appears in words such as “夫人 (wife),” and “男人 (men)” and many other nouns that relate to people. Another word for the Chinese currency, “元 (yuán)” is “The People’s Currency” or “人民币 (rén mín bì).”

Are you a foreigner?

What is the meaning of [human] life?

As you may have seen in number 5, “们” is used as a plural for human nouns, as well as human pronouns such as the three “tas” of Chinese: 他，她， 它. However, you do not usually use “们” with numbers or precise measurements. They can be used with imprecise quantifiers such as “some,” or “a lot”.

I ate with my friends.

Where did they go?

The main meaning of “有” is “have,” to indicate possession. “Not have” or “don’t have” is “没有。” However, “有” is also used to establish the existence of something, like “there is” in English. Another common Chinese phrase that includes “有” is “所有,” which means “all” or “everything.”

Do you have a question?

I don’t have money.

There is a mistake here.

0 responses on "10 common characters in Chinese"